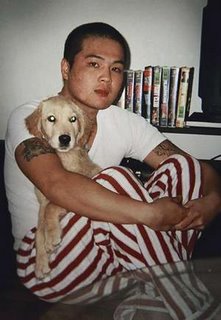 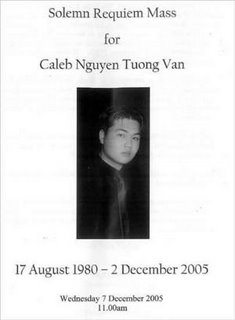 It is fitting that on the early morning of Van’s funeral, Melbourne was in the midst of an unusual summer storm. Heaven, too, is not indifferent to injustice. Later in the day, thousands of people flocked to St. Patrick's Cathedral, in the eastside of the city, to pay their final respects to the 25-year-old salesman turned smuggler.

He’s no hero, said Van’s attorney. That’s true. He was a mediocre kid who made one grave error and paid for it with his young life. His offense was a jailable crime, not one which is warranted by death by hanging. That’s where the injustice lies.

And that’s why thousands of Australians and thousands more overseas mourn Van’s death. It was uncalled for; it was barbaric “justice.”

Yet, even before Van was laid to rest, red-neck Australians and perhaps agents of the Singaporean propaganda machine have been telling the press that Nguyen Van deserved the death penalty. A recent poll, if correct, reveals that about half of the Australian public said Van deserved the noose.

While Australia does have a reputation for and a history of intolerance, I would like to think that a significant segment of the anti-Van crowd is just being contrarian because of the massive media coverage of this case in Australia. I would like to think that the vast and overwhelming majority of Australians are more like those who gathered at St. Patrick's today and at the parish church Friday last as Van was taking his last breadth—people of conscience who see the manifest injustice against a naïve criminal who deserved a jail sentence and not death…
Posted by The FAIRBANK REPORT at 12/07/2005 04:28:00 PM