Music Break: An Epic Twist on a Classic!

Don't Cry for Me (Inner) Mongolia!

From the Korea Herald


Police apprehended a student Thursday for allegedly murdering his mother, having been unable to deal with her increasing academic expectations, and leaving her body to rot for months in their apartment.

According to the Seoul Metropolitan Police Agency, the high school senior, 18, stabbed his mother, 51, in the throat with a kitchen knife in March and left her body to decompose in a room for eight months.

“I was afraid of the severe punishment I was going to receive when my mother found out that I forged my grades to say I was 62nd in the nation during the next day’s Parent Teacher Night,” confessed the student.

The names of the student and his family members were undisclosed to the media.

Authorities said the student confessed that his mother constantly pressured him to be “first in the nation,” and to “go to Seoul National University’s School of Law.

Police say that the mother resorted to violence and other means of torture including withholding food or sleep, when his grades failed to meet her expectations.

Authorities found that the student had been forging his report cards since middle school and his actual pretest scores put the teen academically within the nation’s top 4,000 students. Police also found that his self-graded scores of the College Scholastic Ability Test earlier in the month put him in similar outstanding ranking.

Police found that the young man had sealed the room door with glue as the odor from the decomposing body began to grow.

The student was caught after his estranged father, who recently returned after walking out on the family five years ago, called the police after detecting the putrid odor.

United States of Indebtedness; Was Only $9T When We Blogged About it in 2007

In another life, you'd be my girl

Dedicated to the ones that got away:

DOWN WITH THE ONE PERCENT, INCLUDING THOSE CONTROLLING THE CHINESE COMMUNIST PARTY!!!!

Brilliant!  Using the Party's song against the Party!

Email ThisBlogThis!Share to TwitterShare to FacebookShare to Pinterest
Labels: DOWN WITH THE ONE PERCENT, revolution 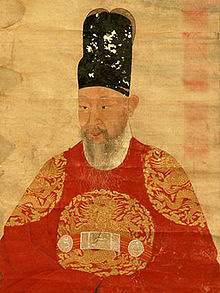 Locked his son, the crown prince, in a rice box to die of thirst and starvation...

A prince is suffocated at the Rice Box Gate

We will never know the rights and wrongs of the matter. But we know one thing for certain: Something terrible happened at the Rice Box Gate.
The killer ― perhaps the murderer ― was a king. Yeongjo, one of Korea’s greatest kings, was decisive, famous for a rigid righteousness. He also had one of Korea’s longest reigns, 52 years. According to his detractors, however, the decisiveness that marked his youth and maturity turned to arbitrary, stubborn senility as Yeongjo advanced in age.
The victim is known to history as Sado-Seja, Yeongjo’s favorite son and the designated crown prince. Yeongjo ― perhaps wise enough to see his approaching senility, perhaps merely following a tradition of abdication in old age common among Korean kings ― had retired to the Mulberry Palace in the west of Seoul and turned over the daily administration of government to Sado-Seja, who lived in Changgyeong Palace near the East Gate.
Those who have read King Lear can guess what came next: The court was split by factionalism. Inevitably, two groups coalesced around the two centers of power: one urging the king to retake his throne, one urging the prince to consolidate his heritage, each in advance of their factional interests.
The King’s group, out of power, whispered in Yeongjo’s ear that his son was overtaxing the people. Indeed, his tax collectors were little more than brigands. Worse, he had developed insatiable sexual appetites. His agents combed the kingdom for the prettiest women, married or not, and brought them to the palace for his pleasure. Now, it was said that he even had plans to kill the old king, his father, outright, and seize the throne.
The king ordered his son brought before him for punishment. And here is where Yeongjo’s Confucian Korea and Shakespeare’s England are different. Sado-Seja submitted to this order. This in itself suggests he was the injured party, the dutiful son. Had he been a schemer expecting what came next, or been planning to seize power, he would surely have refused. Once in his father’s power, he was formally stripped of office, sealed up in a rice chest and left before Seonim Gate in the hot July sun, without food and water. This, they say, was the suggestion of the prince’s own sister.
How could a sister be so heartless? The princess claimed in her memoirs that her plan was only to shock Sado-Seja, who had grown paranoid, back to his senses.
It took the prince nine days to die. After 21 days, they opened the chest. His body showed no decomposition, and was strangely cold.
This was taken by many as proof from heaven of his innocence. The old king supposedly repented what he had done, but too late. The nation suffered through an erratic last few years of his reign. When Yeongjo died, his grandson, feeling the capital’s ground polluted with the injustice, refused to enter the royal palace, and planned to move the government to Suwon.
Through the same haunted gate, the depraved ruler Yongsan-gun passed in 1506. Korea’s Caligula, said to torture virgins after sleeping with them, said to have driven his sister to suicide with his incestuous passions, passed through on his way to exile and imprisonment on Gyodong Island.
The unlucky gate is now sealed. But you can visit it by taking the No. 4 subway line to Hyehwa Station and walking west through the grounds of Seoul National University Hospital to the east wall of Changgyeong Palace. It is the gate just south of the main entrance to the palace.
Admission to Chongmyo will entitle you to stroll north, across a bridge, and into the Changgyeong Palace grounds. Seonim Gate will then be directly to the east, your right.
Posted by The FAIRBANK REPORT at 11/12/2011 05:28:00 PM 1 comment:

Email ThisBlogThis!Share to TwitterShare to FacebookShare to Pinterest
Labels: Korea

Singing Katy Perry's "The One that Got Away."  His country twang makes the song even more robust.

Music Break: Another Great Youtube Talent Discovered by Us!

Only 1416 views so far.  Because of this cool Fairbank Report, this yt video will hit thousands in a few days.  Enjoy!

The video has received more than one million his on YouTube since it was posted in June, and it also appeared on Will Ferrell's "Funny or Die" website.

It pokes fun at police harassment, but some city leaders in West Covina are not laughing.

They pull over an unsuspecting driver, take out their guns and begin to yell at him.

The 'officers' shout "Where's the little girl?" and "You know what we're talking about!"

The very confused and shaken driver puts his hands in the air and insists, "I don't know!"

Finally, one of the officers steps closer to the driver, points at him, and laughs, "There's the little girl!"

After that, the supposed police officers drive away while shooting their guns in the air. It's not clear if actual ammunition was used.
Posted by The FAIRBANK REPORT at 11/11/2011 12:26:00 PM No comments:

In Praise of the Chinese Communist Party

Warning:  Very painful to listen to

Email ThisBlogThis!Share to TwitterShare to FacebookShare to Pinterest
Labels: SPOOKY

From the Taipei Times

The family members of a Taiwanese tourist who was injured by thieves in China yesterday accused the Straits Exchange Foundation (SEF) of reacting too slowly in response to the assault, in which his hand was cut off by Chinese muggers who wanted his watch and ring.

Hu Chi-yang (胡其揚), was assaulted on Friday during a family visit to Putian, Fujian Province, where he was accosted by three robbers who repeatedly slashed his left wrist with a knife to take his ring and watch.


“When I asked the foundation how I could reach my father in Putian, they told me to ask the local airport after I get there,” Hu’s daughter Hu Yi-ling (胡怡玲) said at a press conference in Tapei yesterday.

She said that although her father managed to return home safely on Tuesday without any assistance from the foundation, his left hand remained in China, where local police were keeping it as evidence.

The family wanted to bring the victim’s severed hand back to Taiwan, but Chinese police told them that they needed to keep it for evidence.

The foundation said it did its best in handling the case. It said it did not send anyone to the scene of the crime because it handles a lot of cross-strait disputes every day and was not informed about the severity of the victim’s injuries.

“We have tried our best to ask for assistance from our counterpart, the Association for Relations Across the Taiwan Straits [ARATS],” foundation spokesman Maa Shaw-chang (馬紹章) said. “We have limited ability, as we do not have a representative office in China.”

“We sympathize with the victim,” he said.

Maa said the foundation would keep working with its Chinese counterpart to apprehend the perpetrators of the assault and help the Hu family handle related insurance issues.

After it discussed the case with ARATS officials yesterday afternoon, the foundation said Chinese officials confirmed that Hu Chi-yang’s hand was being kept as evidence by local police.

According to the foundation, ARATS officials said the police had told them that they had obtained Hu Chi-yang’s permission to keep his hand after he underwent surgery on Friday.

From the Daily Mail, UK

Schoolgirl, 7, forced to work as nightclub dancer to support her disabled parents

Last updated at 4:22 PM on 4th November 2011
Meet tragic little Huang Doudou.
At the tender age of just seven she is forced to work four nights a week as nightclub dancer to support her disabled parents.
While her schoolmates are tucked up warm in bed, Huang dons a leotard and high heels to perform in front of guests at the seedy club near her home in Urumqi, Mongolia. Off to work: Seven-year-old schoolgirl Huang Doudou supports her family by working as a nightclub dancer
Wearing heavy make-up and performing four Latin-style routines a night she earns around £80 a month.

Huang was forced to step up when both her parents were left disabled - and she now supports the whole family.
Brave Huang said: 'It's fun but I don't finish until 11 o'clock at night and then I have to do my homework for school the next day.
'I like dancing and sometimes I get tips which helps pay the bills. Sometimes I get tired but it is a very good job.' Doudou waits with her mother before going on stage at the seedy club. she performs four times a night, four nights a week for £80 a month Read more: http://www.dailymail.co.uk/news/article-2057664/Huang-Doudou-7-forced-work-nightclub-dancer-support-disabled-parents.html#ixzz1czu7LjpQ
Posted by The FAIRBANK REPORT at 11/06/2011 10:15:00 PM No comments:

On 9/17/11, this Fairbank Report featured a Herman Caine video; six weeks later, Mr. Caine, a virtual unknown back in September, now tops the polls for the Republican Party's nomination for President of the United States.  The Power of You!

You've got to be kidding me!
http://westandwiththe99percent.tumblr.com/


Staff members of the Fairbank Group are all members of the One Percent Club.  We all have more things and money than we need.  Tax us!
Posted by The FAIRBANK REPORT at 11/01/2011 03:52:00 PM No comments: