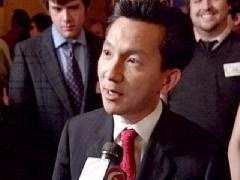 From the Waco Tribune:

It’s doubtful that many Central Texans knew the man who last week pulled off one of 2008’s political upsets.

Even though Jefferson faces criminal corruption charges — famously stashing $90,000 in his freezer — few insiders expected the Democratic incumbent to lose. The Republican Party had all but conceded the seat again.

Cao, however, gave voters a choice. Boosted by a large Vietnamese population, his candidacy went beyond viable to victorious.

A man once without a country now goes to Washington.

The Economy in a World of Hurt...

Anderson Forecast: 'Nasty recession' to include 4 quarters of declining GDP
By
Hilary Rehder
12/11/2008
In its fourth quarterly report of 2008, the UCLA Anderson Forecast predicts that the current national economic recession will include four quarters of negative growth, followed by very tepid growth rates, and rising unemployment that lasts through 2010. California will share the national recession, with negative growth through the middle of next year and high unemployment until 2010 as well.The National Forecast

"The news from the economy is bad," writes Anderson Forecast senior economist David Shulman in his essay "The Balance Sheet Recession." "The recession we had previously hoped to avoid is now with us in full gale force."

The Forecast now expects that real gross domestic product (GDP) will decline 4.1 percent in the current quarter, followed by declines of 3.4 percent and 0.8 percent in the first two quarters of 2009.

In addition, the unemployment rate is expected to rise from its October 2008 level of 6.5 percent to 8.5 percent by late 2009/early 2010. Associated with the rising unemployment will be the loss of 2 million jobs over the next 12 months.The Forecast lays the blame for what it is calling a "nasty recession" on the financial crisis of 2007–08, noting that the economic circumstances underlying current conditions differ significantly from past recessions.

The Forecast's research also notes that the "global economy is in its first synchronized recession since the early 1990s," as Europe and Japan are also in recession, while China and India are suffering growth slowdowns — which, in turn, negatively impact U.S. exports.The California Forecast

California will join the nation in its recession, though the impact will be felt differently across the state. Anderson Forecast senior economist Jerry Nickelsburg writes that the "Inland Empire, Orange County, the East Bay and Central Valley will be hit hardest as the recession provides a double whammy with a generalized downturn in demand and a postponement of a recovery in residential construction."

The UCLA Anderson Forecast is one of the most widely watched and often-cited economic outlooks for California and the nation and was unique in predicting both the seriousness of the early-1990s downturn in California and the strength of the state's rebound since 1993. More recently, the Anderson Forecast was credited as the first major U.S. economic forecasting group to declare the recession of 2001.

The UCLA Anderson School of Management, established in 1935, is regarded among the leading business schools in the world. UCLA Anderson faculty are advancing management thinking through innovative research and teaching. Each year, UCLA Anderson provides management education to more than 1,700 students enrolled in M.B.A., executive M.B.A., fully-employed M.B.A. and doctoral programs, and to more than 2,000 professional managers through executive education programs. Combining highly selective admissions, varied and innovative learning programs, and a worldwide network of 36,000 alumni, UCLA Anderson prepares students to become future global leaders.
Posted by The FAIRBANK REPORT at 12/18/2008 02:53:00 PM No comments:

SEOUL, South Korea (AP) — One of South Korea's most famous actresses was convicted of adultery Wednesday in a high-profile case that drew renewed attention to a decades-old law prohibiting extramarital affairs.
Ok So-ri, who was handed a suspended jail term, had lost a battle in October to have the ban declared unconstitutional.
"I would like to say I'm sorry for causing so much trouble to society," a somber Ok told reporters after the verdict.
A district court in Goyang, near Seoul, handed Ok a suspended eight-month jail sentence, South Korean media reported, meaning she will not have to serve time. Ok's lover received a six-month suspended term.
There was no immediate word on any plans for appeal.
The sensational sex-and-celebrities case has been tabloid fodder for months, with Ok's challenge to the adultery law adding extra spice.
Last year, Ok acknowledged during a news conference that she had had an affair with an opera singer who was a friend of her husband for a few months in 2006. She stressed the affair was a result of her loveless marriage to actor Park Chul.
The court appeared to show some sympathy for Ok's predicament.
"Though the fact of adultery should be criticized, (the court) issued this ruling taking into account that husband Park Chul's responsibility was not small," the court said, according to cable news channel YTN.
She also "suffered mental pains" due to the exposure of her privacy, the court said.
Ok earlier this year filed a petition to have the adultery ban ruled an unconstitutional invasion of privacy. But in October, the Constitutional Court upheld the ban, part of South Korea's 55-year-old criminal code.
Despite decades of Western influence, South Korea remains deeply conservative and is influenced by a Confucian heritage. Those convicted under the anti-adultery law face prison sentences of up to two years, though few serve time.
Supporters of the adultery ban say it promotes monogamy and keeps families intact. Opponents argue the law violates privacy. Complaints have been filed with the Constitutional Court three times in 1990, 1993 and 2001 to abolish the law, but the court has upheld it every time.
While women's rights group were the ban's biggest supporters in the past when the law was meant to keep philandering husbands in line, in recent years some husbands have begun pressing adultery charges on their unfaithful wives.
The number of adultery cases filed in South Korea has dropped in recent years, declining to 8,070 in 2006 from 12,760 in 2000, according to the Supreme Prosecutors' Office. About 80 percent of those cases were dropped before formal charges were filed, largely because complaints were withdrawn.

Many Muslim nations have anti-adultery laws, some with harsh penalties. Taiwan, Austria, Switzerland and some U.S. states also have laws prohibiting extramarital affairs, according to the Korea Legal Aid Center for Family Relations, a government-funded legal counseling office.
Posted by The FAIRBANK REPORT at 12/18/2008 11:54:00 AM No comments:

The Shoe Incident: Does America Have No Pride?!

Had this pathetic incident been directed against Her Majesty the Queen, the British press would have rallied behind their head of state and demanded an apology from the Iraqi government. Yet, the American MSM are silent -- perhaps even gleefully giddy -- over this attack on the Office of the President.

Shame on you MSM. Leave your personal animosity against Mr. Bush aside, and defend the reputation and pride of your country!!!
Posted by The FAIRBANK REPORT at 12/16/2008 10:17:00 AM No comments:

VICIOUS tropical rainstorm beat down from darkened skies Thursday, Dec 4, as mourners held a funeral for Singapore's "angel" murdered by militants in India -- the city-state's first-ever terrorist victim.
The rain continued throughout the 45-minute service, even as Lo Hwei Yen's white coffin left the church.
Lo, 28, was one of at least 188 people, including 22 foreigners, killed in a shooting and grenade rampage by 10 militants who terrorised Mumbai for 60 hours last week.
The Church of Saint Teresa was packed for the private ceremony, and family friends said hundreds of mourners were expected.
Some, like Pearlyn Koh, did not even know the young lawyer.
"I am here to send my prayers and well-wishes to her, her family," said Koh, who attended the funeral on her lunch break.
"I think she was in the wrong place at the wrong time. Why her?"
Hundreds more mourners, including cabinet ministers, turned out during the week for her wake.
Prime Minister Lee Hsien Loong said in a letter of condolence that Lo was his country's first victim of terrorism.
Her death has jolted the nation, which prides itself on rigorous security measures, and politicians said Lo's death reinforces the need for vigilance.
"She was there at the wrong time," Devendran Puhaindran, the uncle of Lo's husband, Michael Puhaindran, said before the funeral.
"I remember her as a very bubbly girl, always with a smile."
Funeral mourners were urged to wear "fabulous black", a reflection of Lo's stylishness.
Even the skies obliged, making the early afternoon resemble the dim light of dusk.
Lo's smiling face has been regularly featured in newspaper photographs since the foreign ministry announced her death late last week.
"You look at her smile, you can see that radiance of her soul," her husband said in a 15-minute eulogy.
"She knows how to enjoy life," he said, adding that friends described her as caring and selfless.
They were married just last year on the Indonesian resort island of Bali, local newspapers have reported.
Reports said Lo had gone to Mumbai for only one night to deliver a talk about the global credit crunch.
She was taken hostage, along with others, by the militants who stormed the Oberoi/Trident hotel where she was staying.
Jai Sohan, an official from Singapore's foreign ministry, told reporters earlier that before she died Lo had conveyed a message from the attackers.
"The terrorists demanded that the Indian authorities refrain from storming the Oberoi hotel or else they would harm her," Sohan said.
In interviews with local newspapers published Thursday, Michael Puhaindran, 37, said that his wife calmly told him in a telephone call from the Oberoi that men with machine guns and grenades had taken her hostage.
"She was extremely brave. Her voice didn't waver," the New Paper quoted him as saying. "She didn't want to panic me."
It was the last time he spoke with her, but newspapers said Lo also managed to send emails to three friends using her BlackBerry.
"If I don't make it out of here, I love you all," her message said, according to Puhaindran.
Lo's body was found on the 19th floor of the hotel.
"Yen, my angel, my princess, words cannot express how much I miss you," her husband said, choking on his words during the eulogy.
Posted by The FAIRBANK REPORT at 12/09/2008 10:34:00 AM No comments: 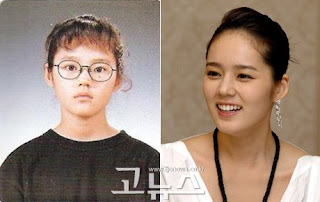 Han Ga-in then and now
In a country and an industry that are notorious for going under the knife in order to look beautiful, South Korea's supermodel and actress Han Ga-in is (mostly) natural beauty. Ever since childhood, she has had the basics of her stunning beauty. Such DNAs must be passed on to future generations!!!
Posted by The FAIRBANK REPORT at 12/06/2008 01:02:00 PM No comments: