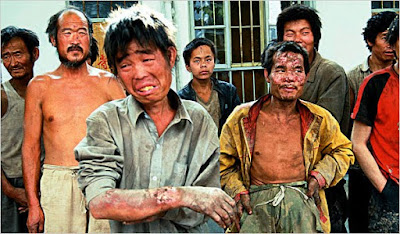 GUANGZHOU, China – A Foxconn Technology worker tried to kill himself Thursday, becoming the 13th person to commit suicide or attempt to do so this year at the company, which makes high-tech products for industry giants such as Apple, Dell and Hewlett-Packard, state media said.

Police said the man survived after cutting himself in his dormitory room at the factory, the official Xinhua News Agency reported. It said the 25-year-old man, surnamed Chen, migrated from central Hunan province and began working at Foxconn two months ago.

Foxconn officials and police did not immediately answer calls by The Associated Press.

The 12 previous suicide attempts at Foxconn Technology Group's operations in southern China involved workers who jumped from buildings. Two survived. Another worker killed himself in January at a factory in northern China.

On Wednesday night, a 23-year-old worker from the northwestern province of Gansu killed himself by leaping from a dormitory balcony. Hours earlier, Foxconn Chairman Terry Gou had led a media tour of the industrial park and promised to work harder to prevent more deaths.

Gou said he couldn't sleep at night and dreaded answering his phone in off hours, fearing more news about deaths.

The Foxconn chairman showed off a motherboard factory, hot line center and even a swimming pool for employees. The walled-in industrial park, where 300,000 people work, looks like a small city, with palm tree-lined streets, fast-food restaurants, banks and a bookstore among huge factory buildings and towering dormitories.

Gou said the company would do everything possible to prevent more deaths. Safety nets were being installed on buildings and more counselors were being hired. He also said all the employees were being divided into 50-member groups, whose members would watch for signs of emotional trouble within their group.

Labor activists accuse the company of having a rigid management style, a too-fast assembly line and overwork. Foxconn denies the allegations.