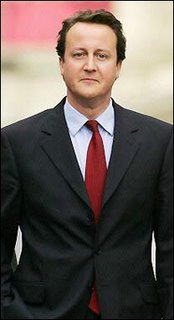 Over the last decade or so, youth appears to be the currency in British politics. After two decades of electoral defeat, the Labour Party, in 1994, selected a youthful 41-year old Anthony Blair to head the Party. Three years later, Labour won by a landslide in the General Election.

The Tories are now taking a page from their Labour counterparts' strategy book. Having suffered defeat in three consecutive general elections, the Conservative Party has "out-youthed" Labour by electing the 39-year-old David Cameron to head the Party and challenge Labour in the next general election.

Yes, youthfulness is appealing. Yes, youthfulness revitalizes politics. But what about experience? If the Tories are defeated again in the next general election, will they then turn to a twenty-something to lead the Party?!
Posted by The FAIRBANK REPORT at 12/06/2005 10:54:00 AM