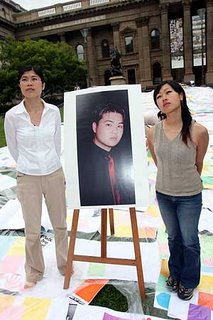 How does that Barbra Streisand's song go again? "People who need people are the luckiest people in the world."

In Nguyen Tuong Caleb Van's case, he was indeed lucky to have two mates, as the Aussies say, who gave their utmost to him over the last three months, if not longer. Van's high school friends Kelly Ng and Bronwyn Lew worked tirelessly to rally Australia and indeed the world behind his cause. They put their lives on hold for him. They gave him their time, boundless energy, affection, compassion and spiritual comfort. They comforted his mother and brother. And Kelly and Bronwyn represented Australia well on the world stage, although that was not their mission. Theirs was, simply, to tend to a friend in need.

How two skinny young women can have so much physical and emotional stamina as well as strength of character baffles me. We need more young people to be like them.

Therefore, we are delighted to name Kelly Ng and Bronwyn Lew of Melbourne, Victoria, Australia as the FAIRBANK REPORT's "Persons of the Year for Calendar Year 2005."

I would agree. P.S. Bronwyn Lew is pretty cute.

I caught up with her recently and she's doing well.