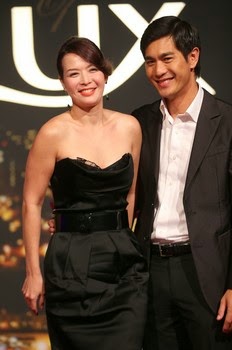 Pierre Png and Andrea De Cruz, the Singaporean celebrity couple, who are best known for Pierre's donation of a portion of his liver to save her life in 2002, are now bravely facing the prospect of Andrea's dying in less than a decade.

From the New Paper

Monday, Apr 28, 2014
The New Paper
By Jocelyn Lee, Judith Tan
SINGAPORE - Even at 39 years old, local personality Andrea De Cruz has not stopped thinking about being a mother - and the fact that she may have only eight years left to live.

De Cruz, who has been married to local actor Pierre Png, 40, for 11 years, is unable to have her own children as she is on anti-rejection medication after a liver transplant in 2002.
The couple made headlines back then, when De Cruz suffered liver failure after taking slimming pills Slim 10 and Png, her then-fiancé, donated part of his liver to her.
The celebrity couple were guests at a Lux event to unveil its new collection earlier this month, where they talked about what keeps their relationship alive and renewing their wedding vows in church last year.
Speaking to The New Paper at an interview afterwards, the lovebirds appeared at ease and were candid about their marriage and even about a topic as morbid as her life expectancy.
De Cruz said: "Statistics show that my body might reject the liver after 20 years. It's been 12 years now, so we have eight more years to go. What if the statistics are true? What if I lose my liver eight years later? Do I want to have a kid and let Pierre raise him or her on his own after that?
"That's a big concern for us."

The couple have thought about adopting since 2010, but have shelved their plans due to time commitment and health reasons.
"We are very realistic and practical about it. We won't say, 'Let's not think about this issue' because there is a possibility that something might happen eight years later. So for now, our fur kids will do," said Png, referring to their three dogs.
- See more at: http://yourhealth.asiaone.com/content/andrea-de-cruz-maybe-only-having-8-years-left-live#sthash.GiIXulKc.dpuf
Posted by The FAIRBANK REPORT at 9/01/2014 08:55:00 AM